Hi everyone and welcome to the second of three posts for the next two days! Counting down to Christmas, Pete and I are posting our reviews for the three short stories that make up Let It Snow by John Green, Lauren Myracle and Maureen Johnson. 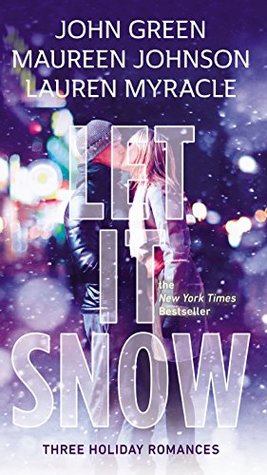 Today’s review is for the third and last short story of Let It Snow, which follows Addie and her two best friends Dorrie and Tegan. Addie’s Christmas break is ruined by her recent breakup with her boyfriend Jeb. Will she be able to work out everything going on in her head and have a good Christmas?

Well if you thought yesterday’s review was bad, good luck reading today! Although I have to say, I did enjoy A Cheertastic Christmas Miracle…I just had a LOT of annoyances with it. And anger surrounding John Green. And a *tiny* bit of PMT that may have possibly made me a little bit more angry than usual. Oops.

But I didn’t like this story for a totally different reason – the main character. Addie annoyed me because of several things. For one, she cheated on her boyfriend. I know, I can practically hear ‘It was only a kiss’ playing in my head, but she still cheated. Maybe it’s just me, but there’s no excuse! It’s something you just don’t do.

And two, her personality really annoyed me. She goes throughout the story basically realising she’s a very self-centered person who needs to change. And then…doesn’t do anything to change herself. Sure, she thinks about it. But she doesn’t really change all that much. Instead, she has some strange kind of epiphany that was so impossible it just annoyed me even more. She still has this whiny voice going on throughout the book that I just…ugh. Couldn’t deal with.

I also didn’t like Dorrie and Tegan. I actually just found them downright rude. You don’t just tell your best friend that they’re self-centered, even if they are. Not randomly, bluntly on Christmas day. You have to release that slowly, right?

Saying all of this, is wasn’t all bad. There were some parts of this story that I liked. For example, the ending. This story was given the goal of wrapping everything up, and I felt it succeeded. I liked the quick mention of all of the characters, and how they all ended up in Starbucks. It was cute, and warmed my heart a little after all those niggles! I have to admit though, yet again I sped through this story. It was partly to get all the Addie stuff over with, but I did enjoy it. It was a compelling read, and I liked the ending overall too.

So even though I’d only rate it 3 stars overall, I’d still say it was a good read and recommend it to those who don’t mind cliche as usual!

The Patron Saint of Pigs is a cringe-tastic story about a girl who is just having a really hard time ok?
Addie takes centre stage as this books teen queen whose perfect pretty life is crumbling into pieces all around her. There were a strange amount of problems with this book. So many that I think I’m just going to curate a nice list so that you can all understand how very poor this story was.
Right from the beginning Addie moans and cries out in an annoying wave of self-pity despite her pain being directly caused by herself. There was hope that she would learn from her mistakes and she even got a new haircut and made friends with an old lady to prove it. But ultimately there just no changing her. All throughout this book I thought, no it can’t be this bad, there is going to be some moral message, some meaning to all of this. I was obviously wrong. Addie was meant to learn that Christmas is about being selfless not selfish. She kept hinting that she wanted to change, she had an instant epiphany within the last few pages that felt watery and left me thinking, wait what? Thats her big revelation? Her transition, her character growth all of it was so cheap and poorly done. It read like the author forgot to develop her lead and then thought oh crap I should probably actually give this book some purpose.
I can go on. The side characters were really quite awful. Addie’s cadre of fellow teen queens were polyester mockups of the main character minus the annoying selfishness. All of the characters felt like replicas of each other, there was no originality. I have nothing against the author but she fell to that ever present trap in YA: The troupes in this book! It felt like a pantomime. We have our innocent beautiful girl who made a bad decision and just feels really quite awful. We have her quirky sidekicks who are just enough on the outside to deem themselves cool and hipster but not too outlandish to appear as freakish or weird. We have the exotic sex god boyfriend. We have the charming hottie jerk. She even threw in absent parents for good measure. This book was a steaming hot pot of cliche and cheese seasoned with a splash of dullness.
There was a really weird timekeeping problem in this book where despite it being a short story we were constantly given useless information and shown irrelevant events. From prolonged bff gossip sessions to strange scenes of Addie working at Starbucks and giving us details about her working at Starbucks I was simply quite bored. This book was not fast paced, it was jumbled and perhaps the author was trying to make it seem more lifelike by including all of that random crap but no, trust me, it was just random crap. I constantly was asking the question: Yeah but what about the actual plot?
This was definitely the worst story out of the three in the Let It Snow bind-up but don’t let it fool you the other two are actually pretty good. It was a sad 2 out of 5 stars for me and should you read it? If your looking for unoriginal cheddar cheese cringe 100% yes!
I’ve really enjoyed reading the Let It Snow bind-up even if the tone of all my reviews is slightly negative with a side of sarcasm. I hope you have a fabulous, spectacular, dazzling and jaw dropping day tomorrow whether you celebrate Christmas or not!
Keep on reading
And thanks again Beth
-Pete

From me and Pete: Merry Christmas Eve everyone! Have a great day and thanks for reading these reviews. We hope you’ve enjoyed it 🙂

Do you have a favourite bookshop?
What’s your favourite YA book? Do you read YA?
Have you been to a literature festival or convention?
Short chapters or long chapters?
When do you prefer to read? Are you a night owl or early bird?
Do you collect classics?
My Tweets
Loading Comments...
%d bloggers like this: