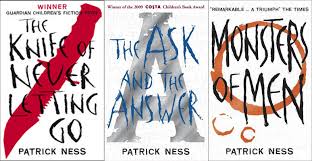 Edition: Paperback, published 2008-2010 by Walker
Synopsis: Todd Hewitt is the only boy in a town of men. Ever since the settlers were infected with the Noise germ, Todd can hear everything the men think, and they hear everything he thinks. Todd is just a month away from becoming a man, but in the midst of the cacophony, he knows that the town is hiding something from him — something so awful Todd is forced to flee with only his dog, whose simple, loyal voice he hears too. With hostile men from the town in pursuit, the two stumble upon a strange and eerily silent creature: a girl. Who is she? Why wasn’t she killed by the germ like all the females on New World? Propelled by Todd’s gritty narration, readers are in for a white-knuckle journey in which a boy on the cusp of manhood must unlearn everything he knows in order to figure out who he truly is.

Omg. I literally just finished this trilogy (a few minutes ago) and oh my. I’ve only just stopped crying (the good kind).

What a series. What. A. Series.

Honestly…better than The Hunger Games for me. And that is a massive statement.

The plot…is outstanding. Suspensful, intruiging but with so many underlying meanings, it’s just unbelievable. There is no filling out, no unnecessary parts at all. Everything is perfectly in place for the book to just…flow.

Oh, and one other thing. So many plot twists. Seriously, if you’re going to read this series, buy them all at once. Because if you don’t….you’ll literally be tearing your hair out waiting for the next book, because big cliffhangers here people!

The characters…are so well written and fitting for the story. All of them, every single one, are really needed.

The writing….is one of a kind. A different style than I’ve ever seen before, but that’s the really good thing about it.

Something I liked…is this entire trilogy. Omg. But actually, I’m surprised to say – the ending. It holds so much hope, so much emotion, so much meaning…more than I ever thought mere words could carry.

Something I disliked…was at the very start of The Knife of Never Letting Go, the langauge. Todd, the main character, uses certain words, such as ‘yerself’ instead of ‘yourself’. And for that first chapter, I thought I wouldn’t be able to get used to it. How wrong was I? These books wouldn’t be the same without it.

What I’m feeling right now…is indescribable. Like my heart has just been torn and smashed to pieces, but also all warm and soft like a marshmallow. I feel so mixed up, so amazed and outstanded at the pure skill that is Patrick Ness. The pure…power.

You need to read this trilogy. There is nothing more to say on the matter.