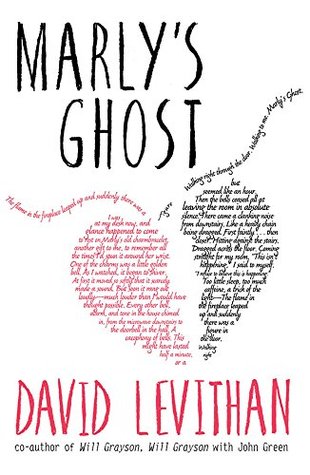 When Ben’s girlfriend, Marly, dies, he feels his life is over and the prospect of Valentine’s day without her fills him with bitterness. But then Marly arrives – or at least, her ghost does – along with three other spirits. Now Ben must take a journey through Valentines past, present and future – and what he learns will change him forever.

I have to say, this book really shocked me. I’m not the biggest fan of A Christmas Carol, Charles Dickens or even David Levithan, but I was a fan of this book.

For a start, I started this book last night, and finished it this morning. I wanted quick read to finish before the end of the month, but I didn’t expect to read half of it in an hour. This book just flew past!

“When the heart stops, you die. Love is everywhere that life is, and if there is no love for life, you die.”

I adored Ben and the other characters – I felt like his grief and how it affected him was explained really well. He was really bitter over the death of Marly, but that’s not how he was like inside nor how he wanted to be. I really felt like I had a close connection with him.

There was also an adorable gay couple called Tiny and Tim who I loved! They gave a whole new element to the story and I like how they were included. I also loved Ben’s group of friends and how sweet they were in trying to support him.

However, I can’t lie when I say I didn’t have issues with this book. It felt a little…weird in places. Some of it felt very wintery, some summery, which kind of reflected Ben’s mood but in a strange way! Also, the voices of Ben and his friends were definitely not teenage. In fact, I just felt like they fitted more in A Christmas Carol itself than in this modern day retelling. Another problem I had is just that this book isn’t really my thing. But that’s just personal, and I still enjoyed it!