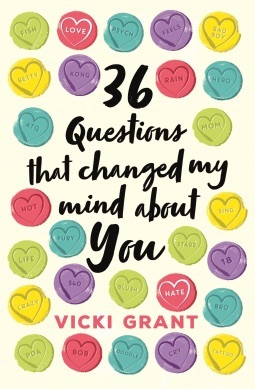 Two random strangers. Thirty-six questions to make them fall in love.
Hildy and Paul each have their own reasons for taking part in the psychology study (in Paul’s case it is the $40, in Hildy’s the reasons are significantly more complex). The study poses the simple question: Can love be engineered between two random strangers?
Hildy and Paul must ask each other 36 questions, ranging from “What is your most terrible memory?” to “When did you last sing to yourself?” By the time Hildy and Paul have made it to the end of the questionnaire, they’ve laughed and cried and lied and thrown things and run away and come back again. They’ve also each discovered the painful secret the other was trying so hard to hide. But have they fallen in love?

Thank you to Hot Key Books for providing me with a copy of this book in exchange for an honest review!

This book has such an interesting concept! It’s based on The Experimental Generation of Interpersonal Closeness, which is a 1997 experiment where couples were set the task of asking each other 36 questions over the course of around an hour and staring into each others eyes for 4 minutes. Six months after the real experiment, two of the couples were married.

“I have to tell you to your face. That’s the only way I can and/or should do it. I’ve got to think of myself, too.”

But I actually think that Vicki did an incredibly good job. I won’t say this book wasn’t predictable and cheesy – it was. But I couldn’t help but find it adorable and romantic. I loved both characters, and I found it so clever how Vicki made us fall for someone who originally came across as such an a**hole. I really loved Hildy and the way the book talked about her family life and her friends.

“Because, honestly, if you don’t want to see me, you probably don’t deserve to know the answer, in which case it’ll be my secret which I’ll take to death.”

This book was so fast paced and really easy to read, I literally sped through this book so quickly. I guess you could say I’m a big romantic, and because of that I really liked this book. But I think you do kind of have to be a romantic to love this book. It’s no bad thing, but I think you should go into this book prepared for cheese.

I found the mixture of texting/dialogue and prose actually worked and is part of the reason this book is so fast paced. Overall, I can safely say I enjoyed this book and I found it really well written. It also included some hilarious lines that actually made me chuckle out loud. I won’t be giving it the full 5 stars simply because it’s not perfect and didn’t completely blow me away, but it’s definitely one I’ll be recommending in the future for lovers of a good rom com. In fact, if this was a rom com movie, I think it’d do really well. And I’d definitely be queuing up to see it.

P.S. If you like the sound of books based on The Experimental Generation of Interpersonal Closeness, I’m fairly certain it’s loosely mentioned in one of my favourite books, The Sun is Also a Star by Nicola Yoon.

2 thoughts on “Review: 36 Questions That Changed My Mind About You by Vicki Grant”