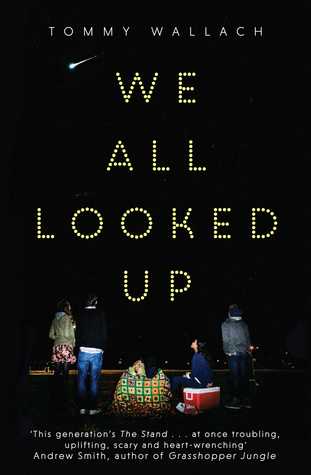 Before the asteroid we let ourselves be defined by labels:
The athlete, the outcast, the slacker, the overachiever.
But then we all looked up and everything changed.
They said it would be here in two months. That gave us two months to leave our labels behind. Two months to become something bigger than what we’d been, something that would last even after the end.
Two months to really live.

Happy New Year everyone! I welcomed in the new year with a quiet night in with my boyfriend, and honestly it was lovely. While we were away, I read We All Looked Up, one of the two books my good friend Pete gave to me for Christmas!

We All Looked Up follows four teenagers in the months before an asteroid hits Earth. It sounds unique, and I’ve heard good things. It’s a contemporary, with romance, and poetic words about the end of the world. What’s not to like?

Unfortunately, I found a few things to dislike. I wouldn’t go as far to say I’m not a fan of this book, or that I didn’t enjoy reading it, but it definitely wasn’t without its faults.

Like I said, I did enjoy these books. I felt a connection to the characters and their ways and I loved the apocalyptic feel of the ever-changing world around them. Wallach explores the way the asteroid affects high school, shopping, eating out, prison and even gas stations. And it actually doesn’t seem unrealistic – because I think it’s grounded by the connection we have with our four narrators.

In some ways, I really liked having the viewpoint of four people – two women and two men. I think it gives every reader someone to relate to, and I definitely felt closer to one or two of them. I also really enjoyed Wallach’s writing, it’s so easy to read. I got through this book in a couple of days and I almost felt lazy reading it. The plot was steadily paced, and that made for a relaxing, laid back kind of reading.

Unfortunately, I did find faults with this novel. I may have liked the slow pacing of the plot, but it was just that – slow. I can’t overlook the parts that dragged without much happening at all. It’s the end of the world, let’s have some movement!

Even though in some ways I enjoyed having more than one narrator, you’re always at risk of having a little confusion. And I did feel confused in parts, because I don’t think Wallach defined his characters well enough. I realised around halfway through the book that I couldn’t actually picture any of them. I’m not looking for extensive descriptions, but just a bit of a mention would be nice. Something to help me imagine them – the only one I could describe for you would be Misery. However, I did like Eliza’s development and her interest in photography. It still doesn’t mean I can picture her, but at least she has some kind of defining feature. Something that makes her who she is.

I also have mixed feelings about the ending. I’m so conflicted, but it left me unsatisfied in some ways. I would have just liked something more definite. Something a little more solid and a little less mushy and poetic.

“You read them, and suddenly you’re a little bit less alone in the world. You’re part of this cosmic community of people who’ve thought about this thing, whatever it happens to be”

I don’t know if it’s worth mentioning, but something else stood out for me in this book. I wouldn’t say it’s a bad thing, because I don’t think Wallach really did a bad job…but I could tell this was written by a man. It just stood out to me when the female characters were talking about men, and it was nothing bad, but I just knew.

So there might be more bad than good here, but don’t read too much into that. The bad is always easier to write about, and even if there were faults, I can’t say I didn’t find this an enjoyable and interesting read.

3 thoughts on “Review: We All Looked Up by Tommy Wallach”