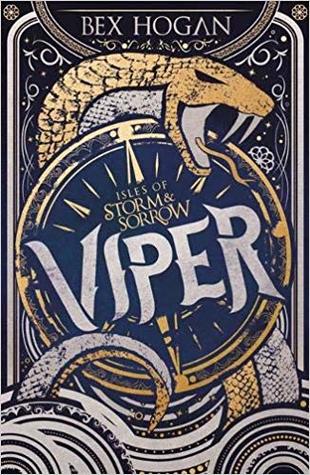 Seventeen-year-old Marianne is fated to one day become the Viper, defender of the Twelve Isles.
But the reigning Viper stands in her way. Corrupt and merciless, he prowls the seas in his warship, killing with impunity, leaving only pain and suffering in his wake.
He’s the most dangerous man on the ocean . . . and he is Marianne’s father.
She was born to protect the islands. But can she fight for them if it means losing her family, her home, the boy she loves – and perhaps even her life?

I really wasn’t sure whether to pick up this book as I’m not usually a fan of maritime, but it has such a beautiful cover that I couldn’t resist when I ended up at a book signing for the author. And I’m happy to say I definitely don’t regret picking it up!

I found myself more sucked in by Viper than I had been expecting – it is fast paced and full of adventure, but has emotional undertones that made me love Marianne’s soft but strong character. She is a brilliant female protagonist and I admired her spirit so much.

The man by my side is my opposite and my reflection. The dark to my light. The light to my dark. And everything in between.

The big shock for me in this book was definitely the gore. It can be quite visceral in parts and isn’t one for the faint hearted! But it only added to the fight scenes for me, which were some of my favourite parts of the book. The scenes went by in the blink of an eye, kept me on my toes and had a great action about them.

The characters were really interesting and I connected to most of them on some level, especially Marianne and those closest to her. I can’t usually pinpoint a favourite part of a novel, but I really could with this one. I won’t talk about it in detail due to spoilers, but there was a lovely part of the book set on the Fourth Isle that I just adored.

But I’m not sure either of us could survive the heartbreak of being together yet being apart.
Love is not enough.

The romance was sweet but didn’t overwhelm the story, which I really liked. And the setting was beautiful and easy to picture – I loved the visuals of some of the islands and they were very encompassing. The politics were enjoyable and not too over-complicated, sometimes I find fantasy can be hard to follow but this one certainly wasn’t!

Overall, this was a captivating story and I enjoyed it a lot! I found it wrapped up quite well for me, so I probably won’t carry on with the series, but I’d definitely recommend it if you think it sounds like something you’ll enjoy!

More like…sheep on the beach. In the rain.
Some of my Waterstones orders arrived while I was away at the weekend and I was so excited to be able to do a (hopefully very satisfying) unboxing for you all!
felt the need to escape to the beach, and here we are….if only for a few days
What’s your favourite season?
A few shots from a fabulous Pride🌈
Genuine reaction to receiving my UK hidden cover edition of @stephanie_garber’s #theballadofneverafter 🥰😍 I wanted the flowers and I can’t believe I actually got them! Slowly building up my collection of these books!
My Tweets
Loading Comments...
%d bloggers like this: