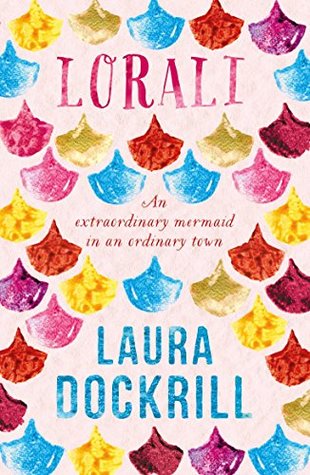 Colourful, raw, brave, rich and fantastical – this mermaid tale is not for the faint-hearted.
Looking after a naked girl he found washed up under Hastings pier isn’t exactly how Rory had imagined spending his sixteenth birthday. But more surprising than finding her in the first place is discovering where she has come from.
Lorali is running not just from the sea, not just from her position as princess, but her entire destiny. Lorali has rejected life as a mermaid, and become human.
But along with Lorali’s arrival, and the freak weather suddenly battering the coast, more strange visitors begin appearing in Rory’s bemused Sussex town. With beautifully coiffed hair, sharp-collared shirts and a pirate ship shaped like a Tudor house, the Abelgare boys are a mystery all of their own. What are they really up to? Can Rory protect Lorali? And who from? And where does she really belong, anyway?

Disclaimer: I received this book from Hot Key UK in exchange for an honest review. This has not changed my views in any way.

This book reminded me very much of Ink, for a good reason and a bad reason. The good reason was the uniqueness. There is no denying I have never read a book like Lorali, or met characters like the ones in her world.

The bad reason, however, is the confusion. I liked the uniqueness, but you can go too far…and unfortunately, I feel like Lorali did.

Creating a whole new concept in YA is a brave thing – and I can say Dockrill did that. But even though the concepts for both Lorali and Ink are both good, they weren’t carried out in the right way.

For a start, the world of mermaids is a concept hard to get your head around, especially in this book. I think part of the problem was the writing – it felt so debut-y. And pre-teen-y. The language just didn’t seem right. Even though I enjoyed the different way Rory sounded in his writing, it came across as immature.

I also disliked the ending, which felt like it cancelled out some of the book for me. I won’t say anymore because of spoilers, but it kind of felt like she lost a lot of the things she gained by ‘surfacing’. Okay, I’m going to stop moaning in a second! The last complaint I have is the amount of different characters in this book. Oh, it confused me so!

Onto the good stuff. I think the concept salvaged this story more than anything else. It’s unique, it’s different, and a lot of people will love it. There are not many mermaid themed books, so this one definitely creates something fresh and interesting. I also can’t say I disliked the book while I was reading it. Sure, I found a lot wrong…but I didn’t hate the actual process of reading it.

So overall, mixed feelings. It’s been a tough choice, but I am going to carry on with the series and read Aurabal if I can! Even though I didn’t like the main ending, the epilogue has actually drawn me in.

I give this book…