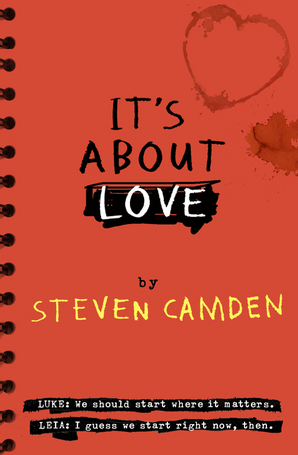 He’s Luke. She’s Leia.
Just like in Star Wars. Just like they’re made for each other. Same film studies course, different backgrounds, different ends of town.
Only this isn’t a film. This is real life. This is where monsters from the past come back to take revenge. This is where you are sometimes the monster.
But real life? Sometimes, only sometimes, it turns out just like in the movies…
… maybe.

I bought this book well over a year ago at YALC 2016 simply because I liked the synopsis, but I’ve only just got around to reading it now. I actually enjoyed this book quite a lot, and there were so many things I liked about it.

On a personal level, this book was pretty cool. For one, Camden is apparently from about 10 minutes up the road from me! And this book is set in my local big city – which I (for obvious reasons) really enjoyed reading about.

I loved a lot about this book. It really tackles some great (and difficult) topics, such as living with someone who has committed a serious crime, which I found really interesting to read about. I also felt (as a media student) that college was portrayed really accurately. I felt utterly convinced that Luke was a film student and Camden obviously knows a lot about scriptwriting. His knowledge really shines through in the book!

“You can’t apologise for something you chose to do. That’s like apologising for being you.”

Unfortunately I did have a few gripes with this book – and one of these was Luke. I was wondering why there was something not feeling right about this book, and I think it’s because of Luke. I just felt like he wasn’t the most likeable character at times and although his mistakes were real, they also made me dislike him.

I liked this book and I can’t really fault it – but I don’t think I connected to it as much as other readers did. It was just a little too gritty for me.

5 thoughts on “Review: It’s About Love by Steven Camden”