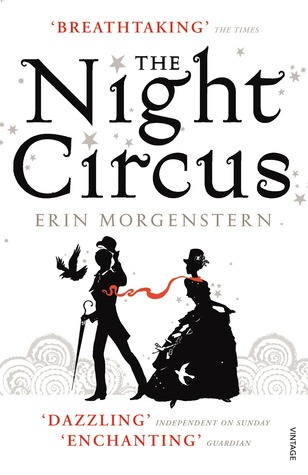 The circus arrives without warning. No announcements precede it. It is simply there, when yesterday it was not. The black sign, painted in white letters that hangs upon the gates, reads: Opens at Nightfall Closes at Dawn. As the sun disappears beyond the horizon, all over the tents small lights begin to flicker, as though the entirety of the circus is covered in particularly bright fireflies. When the tents are all aglow, sparkling against the night sky, the sign appears. Le Cirque des Reves. The Circus of Dreams. Now the circus is open. Now you may enter.

I absolutely adored this book. I found it magical and beautiful, and I don’t know how anyone could not feel involved and enchanted by this book.

It’s been a year now since I found this one, and although it’s taken me a while, I’m so glad I finally got round to reading it! It’s not often that I find a book so heavily setting based, but it worked. It worked so well. It’s hard to describe what exactly I loved so much about this book. I just felt utterly captivated by it.

I can understand why people have called this book boring – but I think sprawling suits it much better. This book kind of needs a large collection of pages to explain itself completely. The plot can come across as so complicated, it works being revealed slowly.

“Secrets have power. And that power diminishes when they are shared, so they are best kept and kept well. Sharing secrets, real secrets, important ones, with even one other person, will change them.”

I felt so completely inside this book. That’s hard to describe, but it’s true. I felt so deeply involved with this thing that is the circus. And I think that’s why this book stands so far apart from many others, because I didn’t feel necessarily involved in the characters or the plot or any normal bookish things. But I felt involved in the circus, and for me, that was enough.

“ Writing them down is worse, because who can tell how many eyes might see them inscribed on paper, no matter how careful you might be with it. So it’s really best to keep your secrets when you have them, for their own good, as well as yours.”

I don’t know what else I can possibly say about this book as I don’t feel I could possibly do it justice. This is an incredibly atmospherical read and I would highly recommend that if you like the sound of it, you should go and read it. And when you do, be prepared to be transported into a world that will completely and utterly enchant you.

11 thoughts on “Review: The Night Circus by Erin Morgernstern”