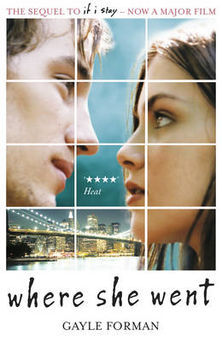 The stunning sequel to Gayle Forman’s international best seller, If I Stay – Now a major film starring Chloe Grace Moretz. If you had a second chance at first love …would you take it? It’s been three years since Adam’s love saved Mia after the accident that annihilated life as she knew it …and three years since Mia walked out of Adam’s life forever. Now living on opposite coasts, Mia is Julliard’s rising star and Adam is LA tabloid fodder, thanks to his new rock star status and celebrity girlfriend. When Adam gets stuck in New York by himself, chance brings the couple together again, for one last night. As they explore the city that has become Mia’s home, Adam and Mia revisit the past and open their hearts to the future – and each other. Told from Adam’s point of view in the spare, powerful prose that defined If I Stay, Where She Went explores the devastation of grief, the promise of new hope, and the flame of rekindled romance.

Sure, I enjoyed this book. I’d go as far to say I liked it. But loved it? Eh. Unfortunately, this book felt so flat and unoriginal to me. I actually really liked the concept of If I Stay, just because it’s not very often we’ll see a book written from the perspective of a ghost girl. But I felt like I’d read Where She Went way too many times before.

I really liked reading this from Adam’s perspective – it shook the series up and really worked. But I have to say, I had some problems with both characters. I didn’t appreciate how Mia treated him and I didn’t appreciate Adam’s attitude to most things, to be honest. I know we’re all flawed, but if so then this should have been more realistic overall and less like a fairytale. I felt flickers of emotion and warmth towards the couple, and I am happy with how it ended, but in the end I could have probably put this book down and never picked it back up again. It was predictable, and I just didn’t feel invested in the story.

“Or even without that. Just to know that she’s somewhere out there. Alive.”

Having said all this, I did enjoy reading this book. It’s quick to read and heartfelt from both characters. I did connect and feel emotion for them in parts, but overall I just felt…mediocre.

2 thoughts on “Review: Where She Went by Gayle Forman”

Follow The Books are Everywhere on WordPress.com
Join 15,615 other subscribers

I’m off work for the next week for the first time since I went full time in October! I don’t have plans for the full week, but it starts with a few days by the seaside relaxing and seeing family❤️
Honestly, Live Photos saved my ability to be able to make this reel❤️
Currently (buddy) reading❤️
Christmas market🎄
Having a festive weekend🥰🎄
More like…sheep on the beach. In the rain.
My Tweets
%d bloggers like this: